In case if you have any doubts about how to delete/remove the name in ration then do leave a comment here. You can also Correct the details on the Ration card.

This ration card serves as an identity proof document or address proof document to the Indian Citizen and it also enables passage for the economically backward people to heavily subsidized food or grain from the ration dealer shop.

The addition or removal of a family member from the ration card is an easy procedure.

There will be two reasons to delete a family member from the ration card. The two reasons are listed as follows.

Whatever the reason, the name should be removed or deleted from the household list according to rules issued by the Central Government.

Even though an individual leaves family to join another family, the individual has to remove his/her name from the list of households in the existing ration card to procure a new ration card.

As some of the sites are still underworking, the online procedure to apply for Name deletion and addition of name in Ration card can be a risky process. By the coming year, the sites can be restored and modified according to the news systems involving in the technological world.

The details are to be filled perfectly with proper information. The details generally included with the following list. 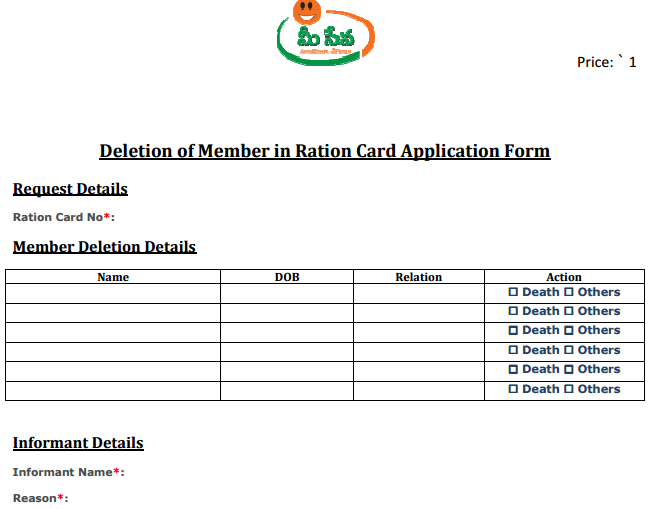 The documents uploaded with the deletion form should be scanned copies of original documents. After the submission of the form, officials will verify the documents attached to it.

If the officials find any false documents uploaded as proof documents along with the deletion form, they will reject the deletion.

Also, know the information about,

The method of deletion of a member from the ration card is very much similar to the online procedure.

The difference is that the forms are to be collected in the nearest food department office or even in the local ration card office. The deletion form is collected and the details are to be filled.

After the deletion form is submitted to the same office with all the attested certificates attached to it as the proof documents. The government officials will verify the documents and then delete the name on your ration card.

In some states, the application form given for Addition of a Family Member and deletion of a family member is the same as the applicant has to choose what he wants from both options. The image below is the sample of the form of the Addition/Deletion form.

The procedure is almost the same for all the Ration Card of Telangana, Tamil Nadu Ration Card, etc. Later, the new and updated ration card can be collected at the nearest ration card office or it can be delivered to your residence address as mentioned in the proof documents.