For the residents of EPDS Telangana state, the government provides Ration cards to their citizens who are backward economically from EPDS Telangana list.

According to Public Distribution System(PDS) of EPDS Telangana State, the ration card issued to the people in Telangana state is classified into three categories as mentioned in the below points namely,

If you need to know any more information related to TS Ration card leave a comment here.

Here we cover the list of application forms from meeseva in order to apply for new ration through online/offline. Just download the application form fill it and visit nearest Meeseva center.

The Process Of Apply:

If you already have a ration card and looking out for download, check status, guide for addition, deletion & correction scroll down to read the guide about TS Ration Card.

Candidates who had applied for the new Ration card or for a modified ration card can download the Ration card from the Food Security website of Telangana State.

The ration card can be downloaded either by the Online procedure or by the offline procedure. Both services are provided by the Telangana EPDS Government to its citizens.

If the candidate has internet services then he/she can download the Ration card from the online portal of the Telangana’s Public Distribution System. The following steps can easily be followed and executed by any candidate in order to download.

The status checking procedure for both cards are same and are detailed in the information below.

Then the status is showed on the following page with all the details of the ration card so to verify if it is his/her Ration card or not. 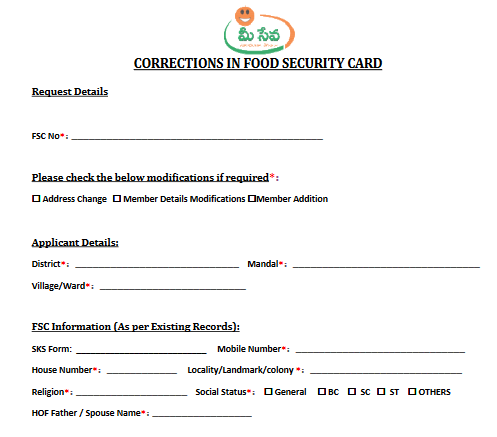 The similar process is applicable to the offline procedure of applying for the Modification form for the Ration card. Offline method to apply for Data Corrections in the Ration card is share and explained below.

The above image is shown, displays the list of the Proof documents that can be admitted to submitting them to the office along with the Data modifications form. Other than documents in this list are not acceptable.

The members’ addition to the ration card is required and mandatory in every household as the ration of subsidies are provided according to the Household Ration card data listed on the PDS. If a new child is born, adopted and any new person enters the family by marriage. For all reasons, the process of adding names are explained below.