TNPDS app or Tamil Nadu ePublic Distribution System takes care of all the public forum documents of the citizens of the Tamil Nadu state.

The most basic document that is handled is the Tamil Nadu Ration Card.

Ration cards, as we know, is a government document that enables a certain section of people known as the ones staying below Below Poverty Line to avail important commodities at subsidized prices.

You can download both Android .apk file or direct installation from the play store and App store for IOS App.

The commodities that are sold at subsidized prices are:

On the flip side, the introduction of Smart Cards has led to some respite for the state government and its treasury. In order to proceed, people need to register their Mobile Numbers with their ration cards.

This will, to some extent, be helpful in tracking the number of active users.

Here we cover the TNEPDS Android App & IOS App download links and complete information on how to install the APP and activate it.

The first page of the TNPDS Android & IOS app after you downloaded & enter your Registered Mobile Number looks like this: 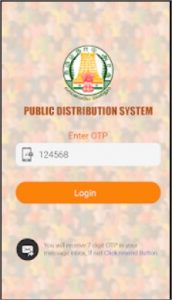 After registering their Mobile Numbers, it would easier for the authorities to access their personal records at their fingertips itself! With an insane surge in mobile internet users in India off late, this was kind of inevitable.

There are tnpds apps for both Android and iOS users. It is estimated that the tnpds app was downloaded more than a million times. It is a good sign for the government that people are willing to go digital, albeit with a little bit of privacy risk involved.

The Android tnpds app was last updated on February 2nd, 2018. The current version is 2.8.

The app links to download or direct installation for both the operating systems are:

The tnpds IOS/android app has the two most important things to notify its users. One of those is the Ration Entitlement which is the feature where a person who is availing the subsidized ration from the government can check his account.

It will be easy to understand for all the Ration holders about what commodities they have used in the due course and by how much. Consequently, it would give them a sense of their balance amount.

After such an important thing, they can easily keep a check on their usage and help save some valuable commodities in store for the government for effective use of the subsidized goods.

The app interface for Ration Entitlement is as follows: 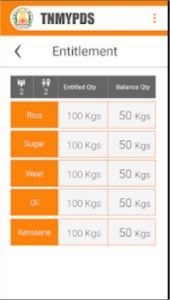 All the commodities are separated with their own records such as:

Apart from the Ration Entitlement service, the tnepds app also provides an easy track of the Ration Transactions for all the users of the tnpds app on their mobiles. Thereby, the transactions are separated on a monthly basis.

The app interface for Ration Transactions is as follows: 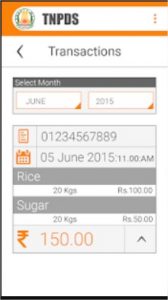 By selecting any particular month, the users can get how much they have spent on the commodities. It would segregate all the different commodities into two separate categories such as:

Thus, the tnepds app is gonna be a good change in the scheme of things. However, there has been criticism off late. There have been a lot of complaints about the tnpds smart ration card app working and user interface.

The complaints are mostly due to the buggy interface and lots of crashes, people to go ahead with their app activity successfully.

It is expected that future versions of the tnpds android app & IOS app will get rid of the internal issues, just like how every person on this planet waits for, before their respective elections.